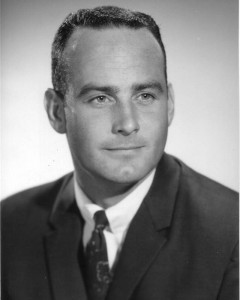 Doug spent more than 30 years at Cal State-Hayward and was inducted into its Hall of Fame as one of the most significant figures in the history of Pioneer Athletics.  Weiss came to Hayward as an assistant baseball coach under Hall of Famer and former head coach and Athletics Director Al Mathews.  He took over as head coach in 1973 and spent 21 seasons at the helm of the Pioneer baseball team, winning 387 games–the most in program history.  Weiss captured two FWC championships, coached three Pioneer Hall of Fame inductees, and managed the most successful baseball team in school history in 1977.  That season, his squad set a program record with 32 victories and came within one game of the College World Series, losing in the NCAA Division II West Regional title game to Ozzie Smith’s Cal Poly SLO team.  In 1992, Weiss transitioned to an administrator role, becoming the third athletics director in the department’s history.  He served in that role for nine years and was instrumental in saving Pioneer Athletics in 1998 by joining the Cal Pac Conference and becoming a Division III Independent when the NCAC disbanded.

Doug Weiss was born in Huntington, W.Va. More than likely the five year old and his family traveled along historic Lincoln Highway when they relocated to San Jose in 1941.

Always a fan of country music, Doug’s favorite was rockabilly.  Although Doug had a passion for music, the longtime Yankees fan followed his love of athletics.  He attended University of California at Berkeley and majored in physical education.

During his sophomore year, his fraternity brother, Jay Griffin, taught Doug to play guitar.  They started a band called The Lazy River Boys, featuring Jay and Doug with John Stewart on guitars and the Gianulias brothers, Gus and Andy, on bass and accordion.

Professional baseball remained Doug’s focus as he pitched his way across the country.  An arm injury in 1960 ended his pro baseball career.  “It was during that time I ran into Campbell Coe and Betty Acreig, who went by the name of Betty Montana.  She yodeled and played standup bass,” Doug said.  “With Campbell and me on guitar, we put together a little three-piece group called The Country Cousins. We played together for about a year in little beer bars and such.”

In 1962, Doug was hired as a baseball coach at San Jose City College.  “Music went into sort of a hibernation but I still had my guitar and played with friends,” Doug said.  He coached at San Jose for five years and then moved on to UC Berkeley as an assistant coach, finally settling at Cal State Hayward (now Cal State East Bay) in 1972.

About the same time, Doug’s friend, Larry Murphy, encouraged Doug to convert to the bass.

In 1976, Doug and Jim Simon put together The Sounds Country Band.  They played, ate, drank and slept in their pickups during weekends.  “We played weekends averaging five to six gigs a month while working full time in our chosen careers,” Doug said.

Four years before retiring from Cal State East Bay, Doug and his wife, Gayle, explored communities to settle in that fit their desire for a small-town atmosphere. They learned that Del Web was opening a new retirement development in Lincoln called Sun City.  After two days in Lincoln, Doug and Gayle felt they had finally found their place.

Slowly, music began to resurface in Doug’s life.  Former side man and fiddle player, Billy Smith, bought a house around the corner from Doug.  Billy introduced Doug to another guitar player, George Bungarz, whose son pitched for Doug at Cal State Hayward.  George lived a few doors down from Billy.  He met Marshall Kee, who played piano, harmonica and guitar in the Sun City Music Group.  Doug encountered Mike Sisemore playing music for a block party.  And so began Lincoln Highway, named after the historic transcontinental highway.  In 2007, they played their first formal gig as a “drummer-less band” at McBean Park.

Gayle introduced Doug to drummer Charlie Keeney, and by 2008, Lincoln Highway was a five-piece band with drums.  “The only connection between any of us was the fact that George’s son pitched for me at Hayward,” Doug said.  “The most amazing part is we all live within less than a mile of each other and four of us are within one block.”

Lincoln Highway’s popular rockabilly-country music has won the Lincoln News Messenger’s Best of the Best Country Band Award in 2008 and 2009.  They are working on their third CD, “Switchin’ Gears.”  “Living in Lincoln has surpassed my expectations,” Doug said.  “I’m a small-town guy at heart and I love what I’m doing now.  I’d love to say we sat down and mapped out this route.  The truth is, we just kept drifting and the stream led us to where we are now.”

Doug’s band is still playing and he is the current president of the Sacramento Western Swing Society.