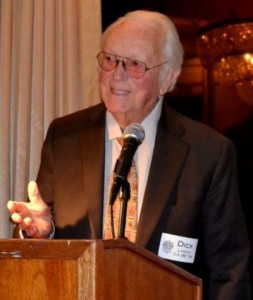 Richard “Dick” Lareau was born in Bremerton, Washington. After his father was stationed at a number of Naval facilities, the Lareau family settled in Chula Vista, CA. He graduated from Sweetwater High School as the war ended in 1945.

While still in school, Dick would visit his older brother on the Cal Berkeley campus. To this day he recalls the impression the architectural coursework of a friend of his brother’s made on him. Seeing the renderings of a young Cal architecture student caused him to realize how badly he wanted to be able to draw that well. Returning to Chula Vista, Dick’s junior high teacher asked the class to design a home — he took the assignment very seriously and began gathering a sense of what a house design meant to his fellow students (seeing them as clients early on).

After the war, Dick sold bottled water door-to-door for five months before following in his father’s footsteps in the military. Immediately after his 3.5-year stint with the US Navy’s V-5 Flight program, he attended San Diego State. Under the tutelage of sculptor John Dirks and painter Jean Swiggett, Dick improved his GPA and transferred to U.C Berkeley where he earned a BA and MA in architecture and would serve as president of the campus Architectural Association. He first joined SAE Cal Theta San Diego in 1949 before transferring to Cal Beta in 1952.

After graduation Dick left the San Francisco area and returned to San Diego where he felt more opportunity would arise in a city with too few licensed architects. He began his professional career in the office of Kitchen and Hunt and later for Paderewski, Mitchell and Dean. He opened his own midtown office in 1957. He later designed a new office at 2845 Nimitz where he continued to practice for nearly four decades.

His architectural accomplishments in San Diego are legendary. He designed the San Diego Visitor Information Center, Peninsula Bank of Point Loma, the Mirimar MCAS Officer’s Club, most of the buildings at Pt. Loma Nazarene University as well as U.S. International University. He also designed or monitored projects in London, France, Nairobi, Kenya, Hawaii, Mexico City, and Japan – all together totaling some 300+ buildings. He also designed the SAE Cal Theta house at San Diego State.

When asked, Brother Lareau stated “My architectural practice has been more fun than work. I would recommend an architectural career to anyone intrigued by the arts & sciences.”

Over the past 20+ years Dick has also been very active in San Diego’s Pt. Loma community, On October 17, 2014, both the City and County of San Diego honored Dick by proclaiming it Richard John Lareau Day. The presentation was made at the annual dinner meeting of the Pt. Loma Association attended by over 450 people.

Dick is still a very active golf player and plays tennis on occasion. He is married to a “Mills” girl, Victory, who is a professional interior decorator.

Dick is a TRUE Gentleman and really lives and breathes SAE. He actively attends local SAE functions and as a member of the SAE San Diego Area Alumni Association.