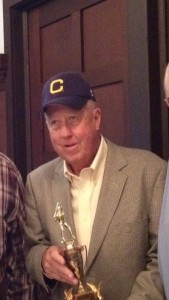 I graduated from Analy High School in Sebastopol, CA in 1951.  I entered Cal and pledged SAE that fall (green as grass!)  What a great pledge class it was and is – maybe the best ever!

Since I had participated in four sports in high school, I tried out for and made the freshman basketball squad and played as well on the Cal Blues (JV) team the following year. I had been “recruited” (with no promises) by Cal baseball Coach Clint Evans, made the varsity in 1952 and played all four years (52 toi55) as the Cal shortstop.  I was voted Most Valuable Player in 1954 and was team captain in 1955. I was also president of the Big C Society in 1955.

It was also a pleasure to participate with the brothers in intramural sports (e.g. touch football, horseshoes, track,) and to be a part of John Gratz’s chorus. (Remember Gaudeamus Igitur?)  My classes included four years of Army ROTC and I was commissioned a 2nd lieutenant of Infantry in September 1955. My first wife, Dorothy (nee) Roth, and I looked forward to my two-year active duty commitment, hoping to go to Europe. I had refused a Regular Army commission as a Distinguished Military Grad because it required a three year obligation—ironic huh?  We went to Fort Benning, GA for Infantry Officers Basic and was assigned to stay at Benning as a platoon leader in the Fifteenth Infantry Regiment.  Army life was OK and we still wanted to travel, so when applications for Regular Army were announced, I applied and was accepted.  I tried to get the Infantry Branch to commit to an overseas tour (was told to write a letter) so I interviewed with the Adjutant General Corps assignment officer who promised a tour in Germany.  Thus, I accepted my RA commissions as an Adjutant General.

Sure enough, after a short orientation course at the AG school, we were sent to Berlin in 1959. Our two daughters were born there and we were in Berlin when the wall went up in 1961.  (A tense time!)

Following that, in 1962 I attended the AG Officers Career Course at Fort Benjamin Harrison, Indiana, than went to the Defense Intelligence Agency at the Pentagon.  I was selected to get a Master’s degree at the George Washington University, went from there in 1965 to Viet Nam as a major on the MACV staff.  Upon my return in 1966 I was reassigned to the Pentagon and served in the Office of the Chief of Staff of the Army.  Promoted to Lieutenant Colonel, I went to Fort Carson, CO as Adjutant General of the 4th Infantry Division, than to Japan as Adjutant General of US Army, Japan.  Promoted to Colonel in 1975, I served as Assistant Chief of Staff, USARJ.  On to the Presidio of San Francisco in 1976 as Sixth Army Director of Personnel and Administration, then to Hawaii on the CINCPAC staff.  Finally, I got the opportunity to go to Fort Bragg, NC as Adjutant General of the XVII Airborne Corps, a job I had aspired to for years.  That enabled me to get back on parachute jump status after all those years!

I retired at Fort Bragg in November 1985 and Nancy and I stayed in Fayetteville, NC for a year and a half then decided to look for greener pastures out west, ending up in Colorado Springs CO where I had served at Fort Carson and Nancy had taught school.  We stayed in the Springs until 2006 during which time I served on the board of COMCOR Inc. (a non-profit community corrections organization providing alternatives to jail, transition from prison programs, and numerous other services.  I was also active in the Military Officers Association of America (MOAA,) serving as the local chapter president and as president of the Colorado Counsel of Chapters.  I was employed briefly as a contractor at Fort Leavenworth, KS and worked at the Broadmoor Country Club of as a starter and marshal.  I also volunteered as a CASA (Court Appointed Special Advocate for children in the judicial system.)

In 2006, we decided to move to a more moderate climate and settled in Sierra Vista, AZ where we remain.  Here, I am serving on our homeowners association board of directors and was Board President in 2009.  I also enjoy golfing at our Pueblo del Sol country club.