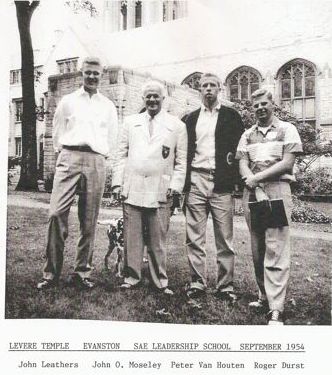 Jack C. Leathers probably holds the record of being an SAE at three different universities during his undergraduate years. He was initiated into SAE at the University of Minnesota in 1951. His family then moved to Seattle, Washington and he spent his sophomore year at the University of Washington. His family moved once again to the Bay Area and he became an active member of Cal Beta his last two undergraduate years. Jack was EA at Cal Beta and was also a member of the Cal crew team and was a fellow in the Order of the Golden Bear.

After graduating in business finance, he served in the United States Air Force for three years as a pilot, flying a B-47 which carried the Mark 21 hydrogen bomb.

Returning to civilian life he trained with Merrill Lynch in NYC and was a stocks and bonds broker for over five years. He left to become a corporate lender, first in leasing, then in commercial finance in Chicago. He then returned to San Francisco where he ran Lloyds Bank’s corporate secured lending program for many years.

Jack’s dedication to Cal Beta SAE is exemplified by his decision in 1995 to bring together as many of the brothers of the 1950’s that he could contact for an annual luncheon. He would send out over 50 postcards every year (not being computer savvy) announcing the gathering and we all enjoyed the fellowship of the brothers at the Fish Market in San Mateo every December for some 15 years, concluding with the singing of SAE and Cal songs. Because of a physical condition he had encountered, he reluctantly agreed to have Jim Kidder take over the task of organizing the luncheon in 2010, which is now referred to as the annual “Jack Leathers Christmas Reunion.”

During his retirement years, Jack is a Civil War buff and lines up an impressive array of speakers (including himself) as program chairman for the Peninsula Civil War Round Table.