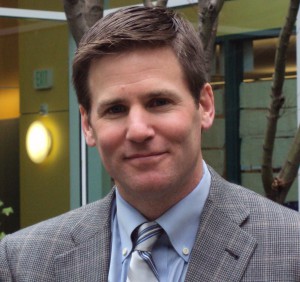 Brian Rogers was initiated into Cal Beta as a part of the Spring 1992 pledge class. Brian lived in the house from that point forward until graduation from the Haas School of Business undergraduate program in December of 1995. While an active member, Brian served in various house leadership roles including House Manager, Social Chair, Game Day Chair and President. Brian was also the head Cal Yell Leader from 1994 – 1995.

When the house fell into disrepair in the early 2000’s, Brian was part of the small group of alumni who worked to raise the money, awareness and expertise needed to remodel and reopen the chapter house.

An Oakland native, Brian Rogers has served as the Executive Director of the Rogers Family Foundation since 2003. The Rogers Family Foundation is dedicated to creating and sustaining access to high quality educational opportunities for the children and families of Oakland, California. Brian currently serves on the Board of Directors at Lighthouse Community Charter School, Bring Me A Book, Education for Change and the Chabot Space and Science Center. Before joining the Rogers Family Foundation, Brian was the manager of the Lair of the Bear, a family summer camp run by the University of California, Berkeley Alumni Association. Prior to that, Brian was an English teacher and Varsity Tennis Coach at his alma mater, Bishop O’Dowd High School in Oakland. During his tenure as Executive Director, Brian has helped to create the Oakland Literacy Coalition, the Oakland Educational Dialogue, the Oakland Charter Collaborative and the Oakland Educational Funders. Brian currently lives in Orinda with his wife Katie and their three children.